Akbar Padamsee was amongst the pioneering radicals forging a new moderninst style in Indian art in the 1940’s. He acquired his Bachelor’s Degree from JJ school of Art, Mumbai and it was during his years there that he got associated with the Progressive  Artists’ Group (PAG) which revolutionized Modern Indian Art. In 1951, Padamsee left for Paris after being awarded a scholarship from the French Government. He lived and worked there till 1967 after which he returned to India. He was awarded the Lalit Kala Akademi Fellowship in 1962 and a fellowship by the Rockefeller Foundation in 1965 which invited him to be an artist in residence at the University of Wisconsin-Stout. In 2010 he was awarded a Padma Bhushan. Akbar Padamsee has held several solo exhibitions through his long and illustrious career both in India and Internationally. He has worked with various mediums from oil painting, plastic emulsion, water colour, printmaking, to computer graphics. He is also a film maker, sculptor, photographer, engraver, and lithographer. Whatever his chosen medium, his works have consistently displayed a strong command over the use of space, form and colour, spanning several important periods in Modern Indian Art. The most familiar body of his works are his abstract non figurative ‘metascapes’ and his ‘mirror images’ which are mainly heads and figures. The metascapes are a development from traditional landscapes and are conceptualized as a sensual celebration of colour and texture. The mirror images are more introspective and reflect his concern with the duality of existence. The solitary heads often echo a contemplative melancholia. He lives and works in Mumbai. 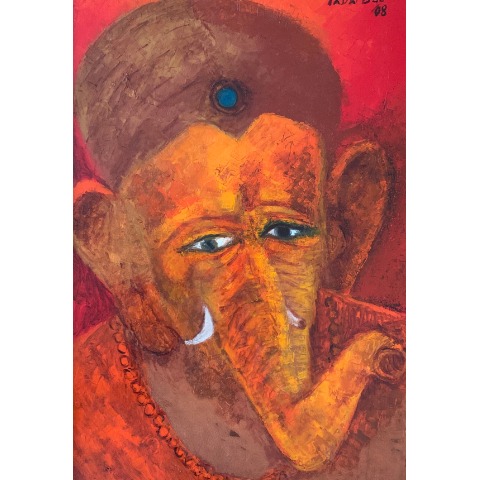