Meera Mukherjee was born in Kolkata, and studied at the Indian Society of Oriental Art School of art.  Later, she earned a diploma in painting, graphics and sculpture at the Delhi Polytechnic. She traveled to Germany in 1953 to study painting at the Hochschule fur Bildende Kuenste in Munich; she dropped painting after a single term in favor of sculpture, the discipline through which she gained international renown.
Her sculptures were deeply influenced by the traditional Bastar sculptors of Madhya Pradesh, with whom she worked. She had learnt the Dhokra method of sculpture which is known as the cire perdue, or “lost wax,” method—a technique for casting non-ferrous metal that has existed in India for some 4,500 years. From that, she innovated her own process for bronze casting.
Meera’s works has a certain kind of unique lyricism and rhythm which overcomes the limitations of the medium. She was well honored her lifetime, the recipient of the Padma Shri, the President's Award of Master Craftsman, and the Abanindranath Award from the West Bengal Government. Mukherjee died in 1998. 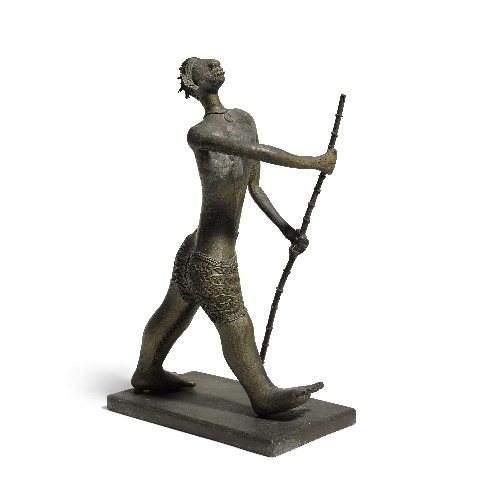