Utkarsh Makwana is on a quest to translate everything from his mind to the paper. His paintings often come across as a note-taking journal, where interesting anecdotes are jotted down to form a distinct narrative.
Through his paintings, he questions the everyday realities he comes across. His artworks navigate through philosophy, comedy and also touch upon the wonder one gets from the mundane. One can also find historical and mythological references in his works. Makwana’s visual interpretations are arresting due to his choice of colours and well-thought-out compositions. Blue, a dominant background shade, relates his works to a parallel infinite space. It gives the impression of being suspended in a boundless sea or sky. Symbolically it is artists’ reference to blue prints used in architecture, from where his structures emerge.
Many myths and fables, folklore and traditions, along with stories from the contemporary settings define Makwana’s creative spirit. The artist gives utmost importance to his research. It appears as if Makwana has given up on rigidity in his thoughts before he sets out to create. There are events and characters from everywhere. Incidences from news, mythology and folklore are regular features. Botanical illustrations, science fiction and found photographs also feature in his art. Rumours and hearsay give a playful layering to the paintings. “I am trying to create a detailed paracosm, a world where fact and fiction come together,” says the artist while talking about his work.
The characters could be real or fictionalised. Life and literature form a constant trope in his art. For instance, in his paintings, we see multiple references to folk tales and hearsay. He disrupts those stories and simply adds more narratives to it. He navigates through time. Past comes to the fore through folk tales. It is often found in perfect coordination with the present. He says, “Sometimes the image comes to my mind first and sometimes a story, which I may have read some time ago. I set out on my creative journey with these reference points.”
A constant feature in his works are the varied geometrical patterns which stem out like a maze, knitting his imageries together. There are references from patterns like Sacred Geometry, Fibonacci sequence and other shapes and sizes commonly found in our surroundings. Such structures appeal to the artist. As his art is set in everyday realities, he believes that these structures are relevant to his visual vocabulary. The maze and the many characters in the paintings leads the viewer back to his mind, leaving them there to find their own path while creating their own stories.
Makwana’s primary tool, his mind, leads the viewer to fabulous territories they often miss. With this exhibition, he invites the viewer to write their own narratives in his personal wonder journal.
-          Text by Bhumika Popli 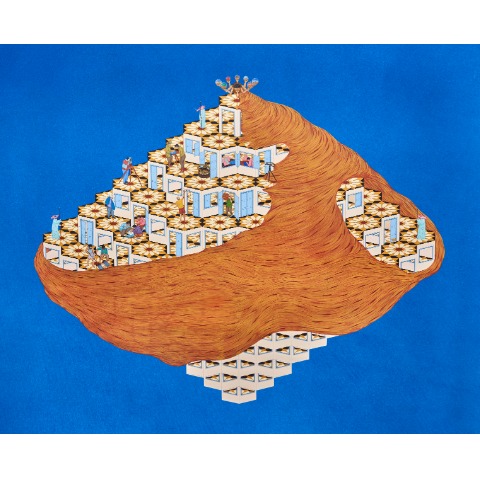 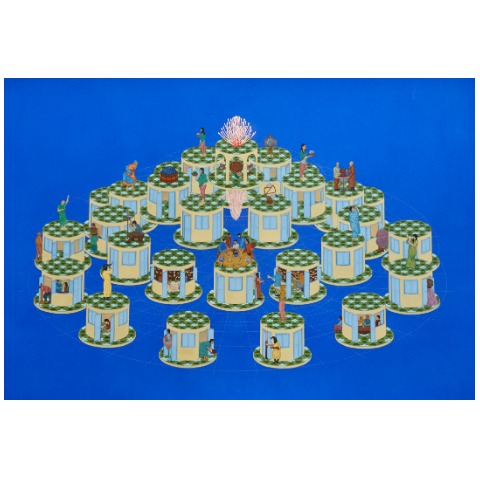